Winning At The DMV

WINNING AT THE DMV

An “Order of Set Aside” is the order the DMV sends a driver accused of a DUI when the DMV hearing officer determines that the driver is not deserving of a suspension on their driving privileges.  See recent “set aside” wins.  This is what every driver accused of a DUI hopes to receive in his or her mailbox after an Administrative Per Se hearing.

With respect to a driver who is 21 or older who is arrested for driving with a .08 percent or more blood alcohol level, the DMV will presume that the driver violated the DUI laws as long as a breath or blood test shows a .08 or higher BAC and the test was conducted within three hours of driving.  It is up to the driver and his or her DUI defense lawyer to rebut this presumption, or show the detention or arrest was not legally conducted.  To win the DMV and avoid the DMV issued suspension, the hearing officer must believe that either:

(1) You were not lawfully detained,

(2) You were not lawfully arrested, OR

(3) You were not driving with a blood alcohol level of .08 percent or more.

If you are arrested for a DUI in California and accused of driving with a blood alcohol level of .08 percent or higher, the citing officer is supposed to provide you with a pink temporary license that allows you to continue driving for 30 more days.  After the 30 days expires your license will be suspended IF you do not request an administrative per se hearing within TEN days from the date of your arrest.  The length of any suspension from the DMV will depend upon whether the current offense is a first, second, multiple DUI offense (determined by how many DUI convictions you have suffered within the past 10 years, although the calculation is determined from the date of arrestto date of arrest), a chemical test refusal, whether you are under 21 years of age, and whether or not you were on probation for a past DUI when you got arrested for the current offense.

Sadly, many people arrested for a DUI in Pasadena or in the city of Los Angeles fail to read the small print on the pink temporary license, and by the time they talk to an attorney, the 10 days has long passed.  While difficult, it may still be possible to get a hearing and fight the DUI suspension even if the 10 days has passed.  The DMV plays an important role in a DUI case because a hearing will also permit the attorney to obtain the evidence such as the police report, blood test and breath test results, etc., prior to the initial court date. Therefore, it is very important for a driver arrested for a DWI in Los Angeles to immediately contact an experienced DUI defense attorney.

If you are facing DUI charges in a Los Angeles or Pasadena Court, call me for a free consultation. It is imperative that the DMV process be initiated within ten day of the arrest so that no rights are waived. 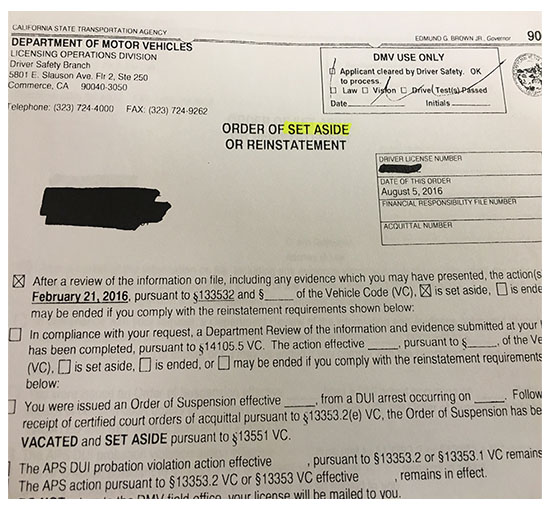