What You Should Do When Stopped For A DUI 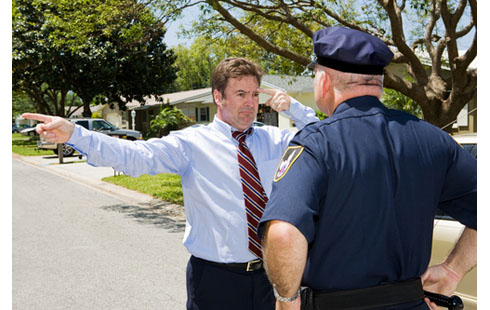 Typically a DUI investigation begins after a driver has been pulled over for some traffic infraction such as speeding or having a tail light out, or the driver is stopped at a DUI checkpoint, or there was an accident for which police were called.  When you are approached by a police officer it is important you be polite and respectful but also KNOW your rights and stand firm.

An officer will usually begin his DUI investigation by requesting your license, registration and insurance.  Always have those items easily accessible and ready to hand over.  The officer will usually lean into your window to try and get a whiff of you to see if alcohol is emanating from your breath and if your eyes are red and/ or watery.  While most of us have red or watery eyes late at night or due to contacts, cops will still note in their report if your eyes were red and watery even if it has nothing to do with the consumption of alcohol.   The officer will then ask you if you had anything to drink tonight.  As soon as you say you had a beer, or a glass of wine, or “two beers” five hours ago, the officer will instruct you to step out of your vehicle so he can better observe you and to have you perform DUI Field Sobriety Tests (“FSTs”).  As the officer is getting ready to start the FSTs, he will ask you pre-field sobriety questions such as where you were coming from, how much you had to drink, what time you started drinking alcohol and the time you stopped. YOU DO NOT HAVE TO ANSWERS ANY OF THESE QUESTIONS.  You will surely be incriminating yourself if you do, and the law allows you to invoke your right to remain silent.  You also can politely refuse to do any field sobriety tests as these “tests” are not required by law and only assist the prosecution in obtaining more evidence against you.  Even a sober driver will rarely perform well on such “tests” and most officers don’t know how to properly conduct FSTs.

Preliminary Alcohol Screening Device.  If you are not on probation for a DUI or under the age of 21, you DO NOT HAVE TO TAKE THE PRELIMINARY ALCOHOL SCREENING TEST.  While the law requires the officer to tell you that the preliminary breath test (the breath test offered to you before your arrest) is voluntary, most officers do not inform drivers that such test is optional.  Officers are trained to make drivers believe that if they simply blow into the PAS machine, there is a good chance that the driver would show a test result under a .08 and then be allowed to go home.  Unless you really are SURE you are sober or have no alcohol on your breath, it is better to refuse the PAS test and let the officer arrest you.  Many times, the PAS test shows a blood alcohol level that is higher than the chemical test taken later at the station or hospital, and this can unnecessarily hinder a strong rising blood alcohol defense.

However, after you are arrested, you will be required to take a breath test or blood test under California’s Implied Consent Law, pursuant to Vehicle Code Section 23612.  If you refuse to take a breath or blood test AFTER your arrest, then you will be facing a “DUI Refusal” which may result in a minimum one year driver’s license suspension and possibly a 9 month DUI class and other harsher penalties.  So it is crucial you know what the law allows you to NOT do and what the law requires you DO.

So basically, in an ideal situation, a driver stopped for suspicion of driving under the influence will have provided the officer his or her driver’s license and registration and invoked the right to remain silent in response to the officers pre field sobriety test questions.  The driver will then politely decline to do any field sobriety tests and will refuse the voluntary preliminary alcohol breath test. However, if arrested, the driver would then agree to complete a breath a blood test in compliance with California’s Implied Consent Law.  This protects the driver from being accused of a refusal DUI under Vehicle Code section 13353, which mandates a minimum one year “hard” suspension (no restrictions) if the driver failed or refused to take a chemical test after being properly admonished by the officer.

If the officer has probable cause to believe you were driving under the influence, you will be arrested and your driver’s license will be confiscated. You will be taken to jail and released with a pink temporary license (good for only 30 days) and a citation that states your court date.  You will have only ten days to request a DMV hearing to contest the suspension and to obtain an extended temporary license. Otherwise, if your chemical test comes back as a .08 or higher, the DMV will automatically suspend your license after 30 days from the day you were arrested.  Having an experienced DUI attorney obtain the evidence through subpoenas, evaluate your case and contest the suspension, is the only way to beat a DMV suspension when the breath or blood test shows a .08 or higher blood alcohol reading.

The circumstances surrounding the driver’s initial contact with police must be investigated and analyzed.  If the initial detention by the police or peace office was in violation of the Fourth Amendment to the United States Constitution, or if the chemical test was obtained in violation of the Fourth Amendment, then an attorney can file a motion to suppress under Penal Code section 1538.5, and if successful, the entire case could be dismissed.

Most people didn’t have the benefit of knowing what to do or say (or not say) when they got pulled over or detained by police for a DUI investigation.  Hopefully drivers will become more educated about their rights and how to protect themselves from overly zealous police officers and prosecutors.

Los Angeles DUI attorney Ann Gottesman is knowledgeable, experienced, compassionate and dedicated to DUI defense.  She has worked for years with the prosecutors and District Attorneys in the Pasadena and surrounding Los Angeles Courts, obtaining many successful results for her clients.  If you or someone you love has been arrested or charged with a DUI or DWI in Los Angeles, call attorney Ann Gottesman for a free consultation regarding you case.