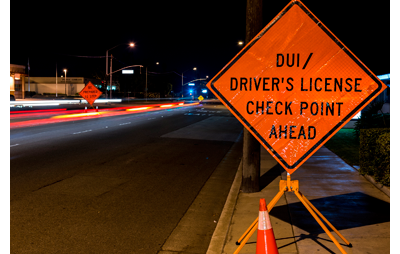 The two most common ways in which DUI arrests occur:  Most drivers are arrested for a DUI after driving into a DUI checkpoint or after being stopped by a traffic officer claiming to have witnessed a minor traffic violation. Drivers who get arrested at DUI checkpoints could challenge the arrest if the checkpoint is later determined to be illegal.  A law enforcement officer doesn’t need reasonable suspicion or probable cause to stop you at a DUI checkpoint. However, he/she needs probable cause to arrest you.  Also, for a checkpoint to be legal, it must meet specific requirements under the federal and California state law. If these constitutional requirements are not met, DUI defense attorney Ann Gottesman will vigorously defend you against your drunk-driving charges utilizing every applicable legal argument.  In this article, Ann will explain what DUI checkpoints are, what to expect when stopped in Pasadena or surrounding areas of Los Angeles, and how to tell whether a checkpoint is constitutionally proper.

What are DUI Checkpoints?

DUI checkpoints are also referred to as roadblocks or mobile checkpoints. They are traffic stops that are not linked to any individual or specific suspicions.

The legality of DUI checkpoints has been a debatable topic in all fifty states. In certain states, these checkpoints are approved, while in others, they are illegal. In the state of California, the law supports the existence of these checkpoints; thus, they are legal. The Supreme Court of California has established that DUI stops are administrative stops for inspection, similar to airport security screenings. Therefore, they are not subject to the 4th amendment rule. The 4th amendment rule provides that a police officer must have reasonable suspicion to begin a drunk-driving investigation.  The officer must have articulable facts to believe a crime occurred.  Even the most minor infraction would be sufficient to investigate a DUI but when it comes to checkpoints, there is no such requirement. The places selected to conduct these checkpoints are random and temporary.

“Petitioners contend the validity of a sobriety checkpoint stop must be determined by the standard set forth in In re Tony C. (1978) 21 Cal.3d 888 requiring an individualized suspicion of wrongdoing. If the primary purpose of the stop here were to detect crime or gather evidence of crime, we would agree with the contention that an individualized suspicion of wrongdoing is required. But, as we shall explain, the primary purpose of the stop here was not to discover evidence of crime or to make arrests of drunk drivers but to promote public safety by deterring intoxicated persons from driving on the public streets and highways. We therefore conclude the propriety of the sobriety checkpoint stops involved here is to be determined not by the standard pertinent to traditional criminal investigative stops, but rather by the standard applicable to investigative detentions and inspections conducted as part of a regulatory scheme in furtherance of an administrative purpose. “

With the traditional DUI stops, an officer should have reasonable suspicion that you committed a traffic offense before he/she can pull you over. However, as explained above, with DUI roadblocks/ checkpoints, the California Supreme Court has determined reasonable suspension is not needed.  Local police officers usually set up checkpoints starting in the evening and continuing late into the night and early morning.  The inspection points are set up in areas known to have a history of drunk-driving arrests.  As an ordinary rule, the law enforcement officer pulls over vehicles depending on a preset formula, for instance, every second or fifth vehicle.

What to Expect When Pulled Over at a DUI Checkpoint

To create a checkpoint, the police agency operates the roadblock and sections off a part of the road.  This results in oncoming motor vehicles being merged into one or two lanes before stopping at the checkpoint.  When a vehicle stops, a police officer will request you, the driver, to roll down the car window. The officer then demands to see your registration and driver’s license. Usually, the police will also engage you in a short discussion. The discussion helps him/her to evaluate whether you may be operating a vehicle while intoxicated.  Officers will look for the odor of alcohol, slurred speech, watery and red eyes when they talk to you through the window of your vehicle.

However, stopping at a checkpoint does not necessarily mean that you must agree to do a pre-arrest breath test, cheek swabs, or field sobriety tests. The tests are voluntary, and you may refuse to take them without being subjected to a penalty. However, declining these tests could lead to you being arrested for drunk-driving anyway.

If you are legally arrested, declining to take a post-arrest drunk-driving breath test or blood test is a chemical test refusal offense. Refusing to do a chemical test has repercussions. For instance, your driver’s license could be automatically suspended for at least one year, up to three years.

Also, the law enforcement officer cannot search your car or your person unless he/she has probable cause to do so.   Officers can  search your vehicle or your person if you give him/her verbal consent. You also have the right to refuse to respond to any question you think is incriminating.  For instance, the police have the right to question you in an attempt to find out if you may be intoxicated with alcohol or drugs.   But you don’t have to answer any questions since you have a constitutional right to remain silent.  It is recommended to politely advise an office that you would “love to answer his/ her questions, but a lawyer once told you to always remain silent if questioned by an officer”.  Aside from providing your identification, insurance, registration and providing a chemical test if arrested, you do not legal have to do or say anything else!

Additionally, people ask if a driver can turn his/her vehicle around to avoid being stopped at a checkpoint. No statute in California prevents a driver from deliberately avoiding a DUI roadblock when done so without any violating any other law. A driver can take a different route or turn around, provided it’s safe and legal to do so. If a police officer sees you evading the roadblock without violating any traffic laws, and he/she pursues you and pulls you over for that reason alone, then the stop will be deemed unconstitutional.  However, keep in mind that police officers can legally stop a motorist avoiding a DUI checkpoint if:

Practically, peace enforcement agencies generally give motorists adequate warning of where the DUI checkpoint will be located to permit them to avoid it safely. You can search for it on Google before heading out so you can avoid the route where there is a checkpoint.

Factors that Can Cause a Drunk-Driving Arrest at a Checkpoint

When an officer stops you at a DUI checkpoint, he/she wants to find out whether you:

In case you show any physical impairment signs, the officer can start a DUI investigation. During this investigation, he/she may request you to:

Depending on the outcome of the tests, the police officer may establish probable cause to believe you are:

California courts consider eight factors when deciding whether or not a roadblock was lawfully placed in a location. When looking at these factors, the court has to balance the state’s interests in preventing DUIs against the personal intrusion on drivers, including the possibility of generating surprise and fear.

Note that checkpoints aren’t unconstitutional. However, failure for the police officers to adhere to strict procedures may render a particular roadblock illegal.

The case of Ingersoll vs. Palmer, discussed earlier, was decided by the Supreme Court of California and it remains as the landmark case relating to DUI sobriety checkpoints. In this case, the Supreme Court established eight guidelines that will help determine whether or not an inspection point is legal/constitutional. They include:

What Happens if You Are Caught Driving With No License On a DUI Checkpoint?

If stopped at a DUI roadblock/checkpoint and you don’t have your driver’s license with you, the officer will decide how to proceed depending upon whether:

If you are not carrying your license with you, you may face VC 12500 or VC 12951 charges of failure to possess a valid license or failure to show a license.  In most cases, this is an infraction whereby you will only pay a fine. If you can later establish that you had a valid license at the time you were stopped, the chances are that your charges will be dropped. Of course prior offenses will decrease the chances of a dismissal.

It is a more serious offense if you don’t have a driver’s license entirely or if your license was revoked or suspended. If this is the case, you may face VC 12500 charges of driving with no license or VC 14601 charges of driving with a suspended/revoked license.  A violation of VC 14601.2 indicates you were driving on a suspended license when the suspension was due to a DUI.  This is the most serious of these charges and could result in jail time.

Your vehicle won’t be seized at the checkpoint provided:

Before 2012, the law permitted officers to seize the vehicles driven by unlicensed motorists at DUI checkpoints. Those who opposed this law argued that the vehicle impoundments:

California lawmakers responded to these criticisms by enacting Assembly Bill (AB) 353, which is now codified as VC 2814.2. This statute prohibits immediate seizure of vehicles at a roadblock if the only offense of the driver is driving with no valid license.

Find a DUI Attorney Near Me

If you have been arrested at a DUI checkpoint in Pasadena, call The Law Office of Ann Gottesman.   Ann will personally evaluate your case and listen to you.  Being arrested for any offense is traumatizing and results in severe stress for most people.  Having an experienced lawyer who cares about you as a person and who will carefully evaluate all legal aspects of the case is an important step in achieving the best possible outcome.  Call Ann Gottesman at 626-710-4021 to discuss your DUI case.