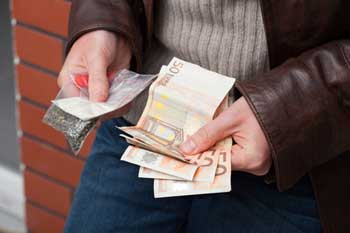 According to Health & Safety Code 11352, it is a felony offense to sell, transport, furnish, administer, import, or even give away, an illegal substance narcotic.  Health and Safety Code section 11379 refers to transporting, selling, importing, administrating, furnishing or giving away methamphetamines and other non narcotic controlled substances.  Pasadena and Los Angeles District Attorneys and city prosecutors strongly prosecute these non-violent drug crimes.  Having a local, knowledgeable and dedicated drug crimes defense attorney can make a big difference in the ultimate outcome of your criminal case.

Up until 2014, it was a felony to have even a small amount of an illegal drug for personal use if you happened to be driving with it in your possession.  For years, we as defense attorneys, as well as the citizens of California, had to deal with the absurdity and unfairness that resulted from this statute.  For example, if a person had half a gram of methamphetamine in their pocket and was standing on the street, that person would be charged with “simple” possession for personal use (assuming no evidence pointing to sales), whereas, another person who was driving, but had the same half gram of methamphetamine in his pocket, would be charged with a felony for transporting the drug.  It made no difference if the person transporting the drug was possessing it for personal use or for sale—if the accused was transporting any amount of an illegal substance he or she could be found guilty of a felony.  Consequently, a person who happened to be driving when he or she possessed the illegal substance would not be eligible to diversion or Proposition 36, whereas the same person who was not transporting the drug would be eligible for alternative sentences and depending upon the drug, would only be charged with a misdemeanor.

It was a much needed change when AB721 (Assembly Bill 721) took effect in 2014 after Governor Brown signed it into law.  This new criminal law made transporting an illegal substance for personal use (not for sale), a mandatory misdemeanor.  District Attorneys could no longer charge a person with a felony solely because the defendant was driving or transporting the drug.  Only transporting an illegal drug for the purposes of sales would be a felony offense in California.  In addition, Prop 47 changed possession for personal use of drugs such as heroin and cocaine from a straight felony, to a misdemeanor.

Currently, transporting an illegal drug for the purposes of sale, is a felony and one is not eligible for PC 1000 diversion or Prop 36 if convicted of Health and Safety Code section 11352 or 11379.  Sometimes, a good defense attorney can plea bargain and convince the prosecutor to reduce and amend the charge to possession for personal use.

DEFENSES TO THE CRIME OF TRANSPORTING DRUGS FOR SALE:

There are several criminal defenses to the charge of transporting for sale under HS sections 11352 and 11379, including the following:

Sometimes, officers set up stings.  An officer will pretend to be a drug buyer or dealer and lure a person into committing a drug sale or drug buy. On occasion, the way an officer conducts the sting could arise to the level of entrapment which would give the accused a defense in court.  However, if an undercover officer merely provides an opportunity for the accused to commit the crime and the officer does not inflict undue pressure, force or harassment, then an entrapment defense would not apply.

According to California law, entrapment is found to occur when a “normally law abiding person" is pressured to such an extent, that he or she commits a crime that he or she would not have otherwise committed.  Government official conduct (including conduct by police) that is characterized as overbearing pressure, harassment, threats or fraud that rises to such a level that a law abiding citizen would be convinced to commit a crime that ordinarily he or she would never commit, is entrapment.

Sometimes, the way the officer finds the drugs on an accused or within his or her possession is illegal. Under the Fourth Amendment of the United States Constitution, a person has a right to be free from unreasonable searches and seizures by the government.  If the narcotic officer does not have probable cause, a warrant or an exception to the warrant requirement, the defense attorney can file a motion to suppress the evidence. If the motion is granted by the Judge, the all the evidence that was found after the constitutional violation, will be suppressed.  Most of the time, this results in the dismissal of the criminal case, because the DA does not have sufficient evidence to proceed.

MAXIMUM SENTENCES FOR TRANSPORTATION FOR SALE OF NARCOTICS

Under the California Health and Safety Code, section 11379, if convicted of transporting an illegal drug for purpose of sale, you could face two, three or four years in jail, and a maximum fine of $10,000.  HS Section 11352 has a maximum sentence of three, four of five years in jail if convicted.

If you have a prior felony conviction for drug sales or transportation for sale, you could be looking at a three year consecutive enhancement for each prior qualifying conviction.

If you are facing a felony drug charge for transporting or selling a controlled substance in Pasadena Superior Court or in one of the surrounding Los Angeles courts, you should immediately consult with a criminal defense attorney skilled in defending drug crimes.  Pasadena criminal defense attorney Ann Gottesman has fought drug charges and protected her clients from lengthy jail and prison sentences for almost 10 years.  She has earned a reputation with the prosecutors and judges as being passionate, skilled and dedicated to protecting her clients’ constitutional rights, reputation and freedom.

Pasadena criminal defense attorney Ann Gottesman has been passionately fighting drug charges for almost 10 years.  With her experience, dedication to her clients, and positive rapport with the local prosecutors and judges, Ann has earned a solid reputation as strong advocate for the criminally accused.

“I find it so important to provide individualized attention to my clients when they are going through one of the most difficult times in their lives.  Many of my clients who are drug addicts or users, but not sellers, are routinely over-charged by the District Attorney with possessing or transporting illegal drugs for the purpose of sale, when in fact, they simply purchased larger amounts of the drug to feed their high tolerance addiction.  I am passionate about fighting and winning drug cases because the “war on drugs” has resulted in non violent, medically ill people being targeted by the government for felony prosecution.  I have yet to meet a narcotics officer who will admit that an accused in possession of a drug in a quantity larger than a few grams, was possessing the drug for personal use.  Despite no evidence of drug sales in the form of small baggies, text messages, etc.., most officers will confidently claim that their experience leads them to believe the defendant was selling drugs.  This is absurd. Every drug counselor and defense attorney who deals with people struggling with addiction, knows that addicts will typically purchase enough of their drug so that they don’t have to make purchases every day, thus exposing themselves to a higher chance of being arrested.  Addicts typically use scales to ensure they are getting the amount of drugs they paid for. However, even a small amount of a controlled substance, if discovered with a scale, will lead prosecutors to file sales charges and cops to testify that they believe the drugs were possessed for the intention of selling them.  I am passionate about fighting these cases and helping my clients obtain the best possible results.”

If you or someone you care about has been arrested or charged with a drug crime, please call Pasadena criminal defense lawyer Ann Gottesman for a free and confidential consultation.  Ann is available for her clients 7 days a week and evenings. Call 626-710-4021 to speak with attorney Ann Gottesman about your criminal case.