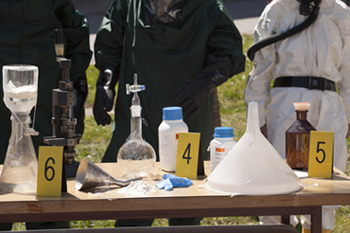 In Los Angeles County, the District Attorney aggressively pursues prosecution of those who sell, transport and manufacture drugs.  With the increased media and stories regarding the consequences of methamphetamine labs catching fire and exploding, the prosecutors are particularly fierce in wanting to send drug manufacturers to prison for manufacturing methamphetamine in homes or structures.  With serious penalties of up to 7 years in prison for one count of manufacturing a controlled substance under Health and Safety Code section 11379.6, and an additional and consecutive 2 years prison if a child under the age of 16 years was present in the structure, it is crucial that you have an experienced and aggressive drug crime defense attorney fighting for you, should you be charged with a drug offense.

Under the California Health and Safety Code, section 11379.6, any person who compounds, converts, manufactures, derives, processes or prepares, either directly or indirectly, by chemical extraction or chemical synthesis, any controlled substance listed in H&S sections 11054 through 11059, is guilty of a felony and faces between three and seven years in prison and a fine up to $50,000.  However, often times, the District Attorney will file additional charges such as possessing the drugs for sale and transporting the drugs for purposes of sale.  Certain enhancements can increase the penalties significantly, such as if a child under the age of 16 was present, or if the accused suffers from a prior drug sales conviction or a strike.

Los Angeles criminal defense attorney Ann Gottesman is intimately familiar with the drug crime laws and legal defenses that apply to manufacturing charges as well as other drug related crimes.

“I am diligent and aggressive in defending my clients against felony drug charges in the Los Angeles and Pasadena courts.  Often times, police trump up charges from a simple possession to a possession for sales, knowing that my client will be facing a straight felony offense and will not be eligible for alternative drug sentencing options such as Proposition 36, Proposition 47, and Drug Diversion.  This is why I carefully review the evidence and investigate each case.  The first issue I focus on is whether the officer had legal authority to detain my client (such as in a traffic stop or one-to-one encounter) and search my client’s person, property or residence. If a search of the home or residence is involved then I investigate whether or not a legal warrant existed or if the officers claimed an exception to the search warrant requirement. If there appears to have been a Fourth Amendment violation by the police, then my office will file a motion to suppress all the evidence that followed the illegal search or seizure.”

Some of the most common defenses to drug manufacturing charges include:

If a Court orders the evidence to be suppressed after a motion to suppress evidence as a result of an unconstitutional search and/ or seizure is granted, then often times the entire case will be dismissed because the DA does not have any evidence left with which to prosecute (or insufficient evidence).  This is why it is important to have a knowledgeable criminal defense lawyer who is experienced in handling drug cases representing you in court.

EXAMPLE OF AN ILLEGAL SEARCH AND SEIZURE THAT SHOULD RESULT IN SUPPRESSION OF THE EVIDENCE AND DISMISSAL:

Jim was driving his car down the 110 freeway at 2:00a.m. on Saturday morning. Officer Jones was driving behind Jim.  Jim was driving legally and not committing any traffic offenses.  However, since it is very late at night and Officer Jones knows many people have just left the bars and are driving under the influence, he has a hunch that Jim may be a DUI driver even though Jim’s driving appears normal.  Officer Jones decides to pull Jim over to “check him out and make sure he is safe to drive”.

Officer Jones approaches Jim’s driver side window and asks for his license and registration, which he provides him.  While Jim is doing this, Officer Jones, peeks in his back seat with his flashlight and sees what appears to be a large clear plastic bag with smaller baggies inside. The substance inside the baggies resembles a white and crystalline substance, resembling methamphetamine.  The officer immediately orders Jim out of the car and hand cuffs him, and then places Jim in his patrol vehicle while other officers arrive.  The police officers search Jim’s vehicle and discover chemicals and tools in the trunk indicative of manufacturing. One of the investigating officers begins to interrogate Jim while he is hand cuffed in the back seat of the patrol vehicle, and after a lot of pressure, he confesses that he had been making meth, but claims it was only a small amount and it was mostly for himself and his friends.

In Court, a criminal defense attorney could file a motion to suppress (pursuant to Penal Code Section 1538.5) the drugs, chemicals and any other evidence discovered after the initial traffic stop, including Jim’s confession.  Since the officer did not have probable cause to believe Jim was committing any violation of the law, Officer Jones did not have legal authority to pull him over. To stop an individual, an officer must be able to state articulable facts that would indicate to a reasonable officer that the accused was committing or just committed a crime. A hunch or speculation is not sufficient.  The Fourth Amendment protects our right to be free from unreasonable searches and seizures, and in this example, Officer Jones had insufficient evidence to initiate a traffic stop.  Once the Judge grants the suppression motion, all the evidence would be suppressed, meaning the evidence is inadmissible. In such a situation, the criminal charges against Jim would be dismissed.

Call the Law Office of Ann Gottesman if you or a loved one is facing drug charges or drug manufacturing charges.  Attorney Gottesman provides a free and confidential consultation, and is available seven days a week.

“If you are facing drug charges, don’t assume you must plead guilty.  I work hard to fight drug charges which will destroy my clients’ life and career if convicted.  Going to trial and pursuing a not guilty verdict, or negotiating a lesser offense or alternative to jail, are options I thoroughly investigate and consider with my clients.  I make myself available to my clients 7 days a week and provide all my clients with my personal cell phone.  I understand that facing felony drug charges is a frightening experience, and my goal is to provide compassionate, experienced and aggressive criminal defense to each client.  Call me anytime and I will be happy to discuss your case.”