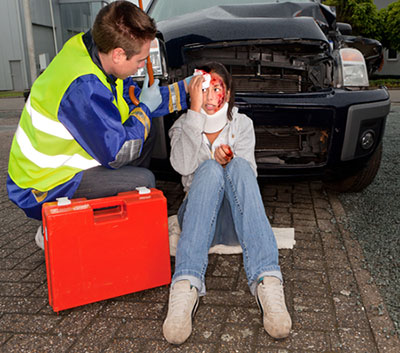 If you happen to be unlucky and end up in a DUI involved accident in Pasadena or some other Los Angeles County area, the District Attorney or City Prosecutor will consider the accident or any injuries that may have resulted from the collision, as an aggravating factor.  However, if there are injuries to another person resulting from the accident, the prosecution must prove a nexus between your driving and the accident that resulted in the injuries in order to charge you with a violation of Vehicle Code section 23153.  If the accident was the other party’s fault, you would NOT be guilty of committing a DUI causing injury.

For example, if you just had a few drinks and are on your way home, driving the speed limit and not committing any traffic violations, when a pedestrian darts across the street outside of a crosswalk, and you hit this pedestrian causing him or her moderate or serious injuries, you would not be guilty of a felony DUI, even if your alcohol level was above the legal limit or you were found to be illegally intoxicated.   This is because the injured party was at fault for the accident by jay-walking, and you were not committing any illegal act aside from driving while intoxicated.  There is a lack of a nexus between your criminal conduct of driving while under the influence and the injuries to the pedestrian.  You could still be convicted of a misdemeanor DUI if all the elements for the DUI are proven.

On the other hand, if YOU are at fault for the traffic accident and found to be driving under the influence of alcohol and/or drugs, or a combination of both, and if another person suffers injuries, you can be charged with either a misdemeanor or felony DUI under Vehicle Code section 23153, depending upon the extent of the injuries.  A violation of VC 23153 (DUI with injury) is called a “wobbler” because it can be charged as either a misdemeanor or felony.

If you are involved in an accident while driving under the influence, for which you were at fault, and another person is injured, you could be charged under one of the sub-sections of Vehicle Code section 23153, as a felony.

Vehicle Code section 23153(a) states it is unlawful to drive a vehicle under the influence of alcohol, and to “concurrently do any act forbidden by law, or neglect any duty imposed by law” while driving, when such an act or neglect “proximately causes bodily injury to any person other than the driver”.  In other words, the prosecutor or District Attorney must prove the following elements in order for an accused to be guilty of a DUI causing injury:

1. The accused drove under the influence of alcohol and/or drugs,

2.  At the time of driving, the accused violated some law in addition to driving under the influence, or neglected to perform a legally required duty (i.e., acted in a negligent manner), AND

3.  The accused’s unlawful or negligent act (aside from the act of driving under the influence), caused injury to another person.

Sub-section (b) of Vehicle Code section 23153 addresses DUI causing injury when the driver’s blood alcohol content (“BAC”) was a .08 or more at the time of driving, and subsections (c), (e) and (f) address the same crime while under the influence of drugs or a combination of alcohol or drugs.

VC section 23153 (d) relates to commercial drivers who are alleged to have caused injury to another person while driving a commercial vehicle with a BAC of .04 percent or more.  While the elements are similar to the elements for driving while under the influence with a .08 or higher BAC, if you were driving a commercial vehicle at the time of the accident and you were the proximate cause of the injury to another, and you were driving with a .04 percent or more of alcohol in your blood or breath, you could be charged with a violation of Vehicle Code section 23153(d) as a misdemeanor or felony.

This is a “presumption” that the legislature made up out of thin air and is not based upon any reliable scientific principal or calculation.  It makes little rational or scientific sense to say that if a person is, for example, blowing a .09 BAC on a breath test 2 and one half hours after driving, that the driver must have been at least a .08 BAC at the time of driving.  It is simply absurd because a breath or blood test only measures the amount of alcohol at the time of the test.  It can not predict by itself what a person’s BAC was at some earlier time.  Breath and blood tests are not time machines.  And yet, we are stuck with this law because the Legislature wrote it this way.  At least the defense has an opportunity to rebut this absurd “presumption”.

As explained above, a DUI with injury charge is called a “wobbler” because the prosecutor has discretion to file the charge as a misdemeanor or a felony.

Whether the District Attorney will charge you with a felony or misdemeanor DUI causing injury will depend upon several factors, including the severity of the injuries, the number of victims, your prior criminal record, whether you have prior DUI convictions within the past 10 years from the current arrest date, your level of intoxication, restitution and any other factors the DA finds to be aggravating or mitigating.

MAXIMUM AND MINIMUM PENALTIES FOR DUI WITH ACCIDENT CAUSING INJURY:

A conviction for a Misdemeanor DUI with injury can result in the following:

A conviction for a Felony DUI with injury can result in the following:

HIRE AN EXPERIENCED AND CARING DUI LAWYER TO REPRESENT YOU IN COURT AND WITH THE DMV.  PASADENA DUI ATTORNEY ANN GOTTESMAN PROVIDES FREE CONSULTATIONS 7 DAYS A WEEK.

Located in Pasadena, California, DUI defense attorney Ann Gottesman has been zealously representing clients accused of driving under the influence of alcohol or drugs and those accused of other related crimes in the Los Angeles Superior Courts for almost 10 years.  She has a good reputation with the District Attorneys, prosecutors and Judges, and has achieved success for many of her clients.  Ann is compassionate, dedicated and really cares about her clients as individuals.  She leaves no stone unturned when fighting to protect the rights of her clients and their driving privileges.

If you or someone you care about is facing a DUI or a DUI that resulted in an accident with or without injuries, call attorney Ann Gottesman at (626) 710-4021 for a free consultation.  She is there for her clients 7 days a week.