FIRST AND SECOND DEGREE ROBBERY: THE LAW AND PENALTIES 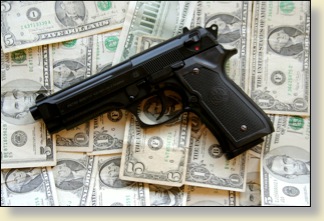 Under California Penal Code section 211, Robbery is defined as, “the felonious taking of personal property in the possession of another, from his person or immediate presence, and against his will, accomplished by means of force or fear.”

Robbery is a felony offense and punishable in the state prison by two to nine years, depending upon whether the District Attorney charged the defendant with a first degree or a second degree robbery.

Robbery is considered a serious and violent felony under the law, making it a Strike. Also, the penalties for a robbery can be much more than the standard sentence if there were aggravated factors, such as if a weapon was used, if the robbery was gang related, or if the victim was injured.

Pasadena Theft Attorney explains what the Prosecutor Must Prove for You to Be Convicted of Robbery:

Elements of the Offense:

There are many defenses to the charge of first or second degree robbery. But to be convicted of a robbery, the prosecutor has the burden of proving the following elements beyond a reasonable doubt:

It is important to understand that robbery, unlike grand theft or other theft offenses, is not concerned with the dollar value of the item(s). So, for example, the item taken in a robbery could be something as small as a stick of gum.

Los Angeles Theft Lawyer Explains the Elements for the Crime of Robbery (PC 211):

As you can see from above, the prosecution must prove 5 elements before a Defendant can be convicted of a robbery.

If any one of the elements is not supported by the evidence then the accused is not guilty of committing a robbery. There are many legal defenses to the crime of robbery. Some of these defenses include the defense of “claim of right”, identity, lack of force or fear, and of course, an alleged victim can falsely accuse a person of committing a robbery. There may be other defenses to the crime of robbery that a good criminal defense lawyer can present when representing you in court.

It is important if you or someone you care about was arrested or charged for committing a robbery, in violation of Penal Code section 211, that you immediately contact a knowledgeable a Pasadena robbery defense lawyer.

Call Los Angeles robbery defense attorney Ann now for a free consultation if you or a loved one is being accused of committing a robbery or any other Los Angeles criminal offense. You can reach Ann directly at 626-710-4021.